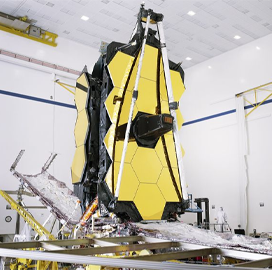 The agency said Wednesday that the telescope will use the same configuration for its 21-foot mirror upon its launch in 2021. Testing procedures for Webb and its mirror began last month at Northrop’s facility in Redondo Beach, Calif.

During the assessment, teams used special equipment to mimic zero-gravity environments to assess the telescope’s capacity to operate and maneuver in space.

“Deploying both wings of the telescope while part of the fully assembled observatory is another significant milestone showing Webb will deploy properly in space," said Lee Feinberg, an optical telescope element manager at NASA. “This is a great achievement and an inspiring image for the entire team.”

The Northrop-NASA team plans to conduct reassessments in the coming weeks in light of the COVID-19 health crisis.