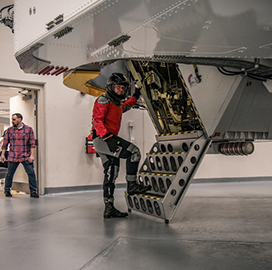 AFRL also designed the centrifuge to help fast-jet aviators train in an environment with nine times the normal force of gravity. A team composed of engineers from NASA and AFRL worked to convert the centrifuge from an aircrew training platform into an astronaut testing facility.

“With the new vehicles back in the family with those G-loads, we’re basically reviving that whole G-training aspect and every astronaut will start going down this path,” said Michael Barratt, an astronaut and physician at NASA.