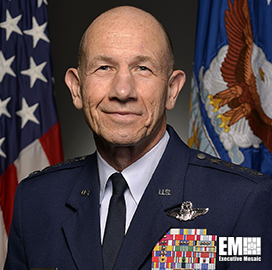 “In our initial market research, there was some thought that there might be only one airplane there was going to be bid against it. But as we did more market research, we found out that there were multiple people that wanted to bid, and they were going to bid with a couple of different airplanes at least,” Holmes told reporters at a Mitchell Institute for Aerospace Studies event.

The service initially planned to lease from Hillwood Aviation up to eight T-50A trainers, which was built by Korea Aerospace Industries and offered by Lockheed Martin for the T-X competition. Boeing won the T-X contract with its T-7 Red Hawk offering.

“We proposed to lease some airplanes while we’re waiting on the T-7 to arrive and do some experiments along with AETC [Air Education and Training Command] to try to figure out what’s the best use of this new T-7 that we’re going to buy,” Holmes said.

He noted that the service plans to start leasing up to 11 training jets by the summer of 2021 through the RFX program.