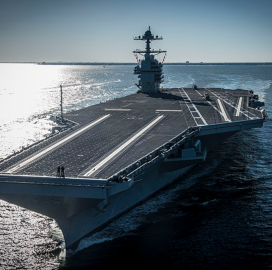 The U.S. Navy has begun to set the USS Gerald R. Ford aircraft carrier for communication system tests that would occur for more than a year in the Atlantic region, Defense One reported Monday.

The ship's voice and data link systems will undergo sea trials to demonstrate the ability to perform command and control with other ships.

These C2 systems facilitate battle information sharing across naval ships and aircraft. USS Gerald Ford will establish connectivity with USS Harry S. Truman, a Nimitz-class aircraft carrier, and other ships in the tests.