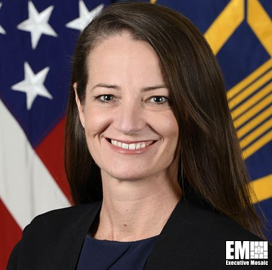 She was nominated to serve as deputy undersecretary of defense for intelligence and security in February before the White House announced last week that it will nominate Bradley Hansell, associate director of Boston Consulting Group, for the post instead.

Mark Esper, secretary of the Department of Defense (DoD) and 2020 Wash100 Award recipient, said in a statement that Wheelbarger "brought a wealth of experience and the utmost professionalism" to the DoD and was instrumental in driving efforts to support the Trump administration's national defense strategy.

Prior to her current role, Wheelbarger served as vice president for litigation and chief compliance officer at CSRA. She also spent time as a policy director and counsel at the Senate Armed Services Committee where she oversaw the panel’s intelligence portfolio. She served as counsel to former Vice President Richard Cheney and held leadership duties at the Department of Homeland Security earlier in her career.