Navy Signs Agreement for USAF Leadership Over Joint Base Anacostia-Bolling 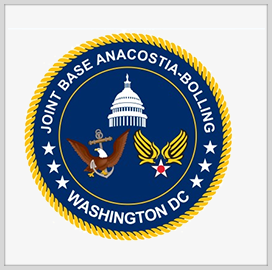 The U.S. Navy has signed an agreement that formally transfers the authority of Joint Base Anacostia-Bolling (JBAB) to the U.S. Air Force (USAF). A memorandum of agreement signed between Vice Chief of Naval Operations Adm. William Lescher and USAF Vice Chief of Staff Gen. Stephen Wilson allows for a transfer of over 900 positions and funds worth $645 million related to JBAB, the Air Force said Thursday.

JBAB will host the 11th Wing and support the group's mission partner network of about 70 entities. The Navy will continue to oversee the Washington, D.C.-based facility until October 2020 when the next fiscal year begins.

“More than half of the mission sets on JBAB fall under the Air Force, so it made sense for us to assume the responsibility for prioritizing installation and mission-support resourcing at the base,” Wilson said.