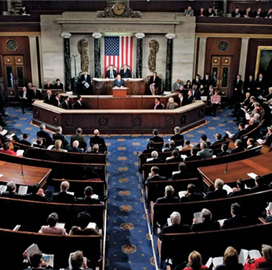 James Anderson, former assistant secretary of defense for strategy, plans and capabilities, has been confirmed to serve as the Department of Defense’s (DoD) deputy undersecretary for policy, Defense News reported Wednesday.

The Senate voted 78-17 to approve Anderson, who was confirmed to his most recent capacity in 2018. President Trump first announced his intent to nominate Anderson for his new position in March.

In his previous role, Anderson oversaw program and budget management activities at the DoD and advised the defense secretary and undersecretary of defense for policy on defense strategy and national security matters.

He also served as vice president for academic affairs at the Marine Corps University and spent time at consulting firm DFI International as an associate. Prior to Anderson’s confirmation, Senate voted 75-15 to confirm Victorino Mercado as Anderson's replacement.

Before retiring in 2018, Mercado spent 35 years in the U.S. Navy where he held various acquisition and engineering leadership roles. He also served as executive assistant to the chairman of the Joint Chiefs of Staff and military assistant to the deputy secretary of defense.