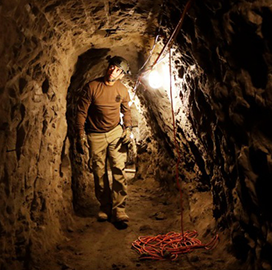 ARL said Tuesday the SubT-Tunnel dataset uses simultaneous localization and mapping (SLAM) elements to inform the development of unmanned systems that will be used to navigate natural and man-made underground environments.

The software suite virtually places the autonomous system into a simulated environment such as a Pittsburgh research mine to test various approaches to locating assets and survivors.

ARL noted that it used SubT-Tunnel to test the OmniMapper software and Google’s Cartographer offering as well as other approaches beyond GPS and LiDAR capabilities.

According to the lab, SubT-Tunnel was based on objectives for the Defense Advanced Research Projects Agency’s (DARPA) Subterranean Challenge Tunnel Circuit.

ARL published details on the effort in a research paper as part of the 2020 IEEE International Conference on Robotics and Automation.