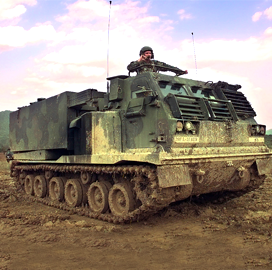 The U.S. Army conducted a live-fire demonstration to assess the capacity of its cross-functional teams to use space-based sensors to defeat beyond-line-of-sight (BLOS) targets, C4ISRnet reported Monday.

During the demonstration, the Army used its Multiple Launch Rocket System (MLRS) and M777 howitzer weapon system to coordinate artillery operations with other sensors, vehicles and platforms for fire direction.

The Army expects the exercise to support its Long-Range Precision Fires (LRPF) program as well as its efforts to establish a multidomain strategy, according to a spokesperson for the service branch.

The service additionally intends to develop a universal architecture for kinetic and nonkinetic assets and integrate the sensor-to-shooter concept with aviation platforms, the spokesperson noted.