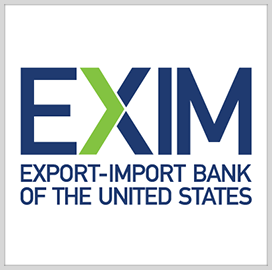 Officials of the Export-Import Bank of the United States said they are extending help to U.S. space companies facing competition from firms backed by the Chinese government, SpaceNews reported Thursday.

David Trulio, a senior vice president at Ex-Im, said the bank has received a congressional mandate to offer help to the space industry and exporters through the Program on China and Transformational Exports.

‘It’s a crucial mandate that we’re working to operationalize,” Trulio said Thursday at a virtual forum.

The Ex-Im program offers loans to foreign entities buying U.S. goods and services and Congress directed the bank to earmark at least 20 percent, or approximately $27 billion, of its financing authority for the program.

Judith Pryor, board member of Ex-Im, said the bank, which had offered $5 billion worth of loans to U.S. satellite and launch services buyers 10 years before it lost its congressional authorization, has “seen an uptick in non-geostationary satellite requests.”

Those include the rising demand for funding for low-Earth orbit satellites used for remote sensing and Earth observation missions and for in-orbit servicing.