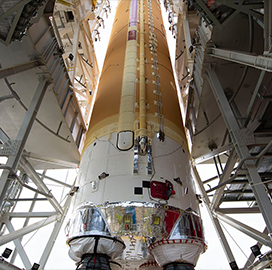 NASA announced that the administration has concluded a systems checkout for the core stage of a rocket designed to support the agency's Artemis I mission.

The test used Green Run software that was developed for the test and loaded in the flight computers for the first time. The SLS avionics power on and checkout was the second of eight tests in the Green Run test series at NASA’s Stennis Space Center near Bay St. Louis, Mississippi, where the core stage is installed in the B-2 Test Stand.

A team of Boeing and NASA personnel worked in control rooms to power the avionics and the core stage flight hardware of the Space Launch System during the checkout, the agency said Wednesday. The agency validated the core stage's computers and avionics at the Marshall Space Flight Center's systems integration and test facility prior to the test.

The three flight computers and avionics are located in the forward skirt, the top section of the 212-foot tall core stage, with more avionics distributed in the core’s intertank and engine section as shown in the right image.

The rocket's core stage will work to propel the Artemis I mission by producing over 2M pounds of thrust. Formerly known as Exploration Mission-1, the effort seeks to allow human exploration to the Moon and Mars.