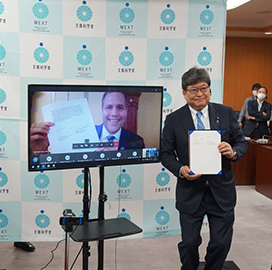 Jim Bridenstine, NASA administrator and 2019 Wash100 Award recipient, has formed an agreement with Japan in support of the International Space Station and the Artemis program, an effort that aims to revive manned space exploration.

“We appreciate Japan’s strong support for Artemis and look forward to extending the robust partnership that we have enjoyed on the International Space Station to cis-lunar space, the lunar surface and beyond," the NASA head said.