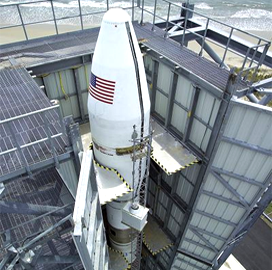 The Space Force’s Space and Missile Systems Center (SMC) said Saturday that NRO Launch-129 will lift off from NASA’s launch complex on Wallops Island in Virginia as part of the Orbital/Suborbital Program 3 (OSP-3) initiative.

According to a report by C4ISRnet, Northrop Grumman’s Minotaur IV rocket will launch NROL-129 within the 9 a.m. ET window on Wednesday. The report noted that details on the NRO payloads remain classified.

Lt. Col. Ryan Rose, chief of the Launch Small Launch and Targets Division at SMC, said that NROL-129 will serve as the division’s first Space Force mission as well as the “first dedicated NRO mission” from Wallops’ Mid-Atlantic Regional Spaceport.

SMC has launched 26 missions through the Minotaur vehicle with the last mission taking place in 2013, he noted.