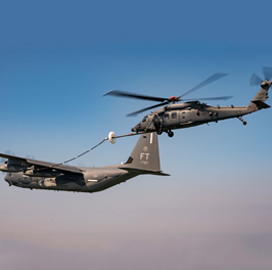 The HH-60W Jolly Green II helicopter flew up to 3K feet above Eglin Air Force Base and linked with an HC-130J aerial tanker to carry out the refueling test, USAF said Monday.

The demonstration is a part of the 413th Flight Test Squadron's two-week developmental test for Jolly Green II's aerial refueling capacities. The team will monitor the helicopter's handling and its capability to attach to the fuel drogue during the tests.

The group will also assess the functionality of the aircraft's gauges and systems.

"Our job is to evaluate how difficult aerial refueling will be for operational pilots and to identify any unforeseen hazards due to the unique configuration of the HH-60W, which may not have been present in the legacy HH-60G," said Joe Whiteaker, 413th FLTS combat rescue helicopter flight chief.