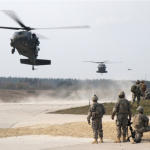 The report said the Army’s program executive office aviation said the service plans to deploy by the end of fiscal year 2024 a “cloud in the sky” for its aircraft fleet. Maj. Gen. Thomas Todd, then-PEO for Army aviation, told the publication in an interview last year that AMCS is “very much a flying cloud” and “will reside inside every aircraft” to provide data storage, transport and processing capabilities.

After the analysis, the next phase of the AMCS effort will focus on preliminary design and critical design work. Demonstration and qualification testing will be the fourth and final stages, respectively. Hylton said the service will require vendors to provide production-representative prototype hardware line-replaceable units of AMCS, software and other components.

“The government reserves the right to perform a downselect at the end of each stage,” Hylton added.