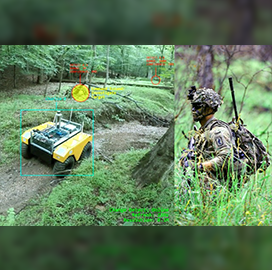 The U.S. Army performed a demonstration of a small autonomous mobile ground robot designed to trace physical changes in the environment and transmit information to a human teammate via augmented reality technology.

The service branch said Monday it equipped the robot with laser ranging sensors while a warfighter wore AR glasses to test the technology's capacity to build a 3D representation of the environment.

The robot compared its current and previous observations while on patrol to determine possible changes in the area. The warfighter then viewed the changes instantly through the eyewear.

"This could let robots inform their Soldier teammates of changes in the environment that might be overlooked by or not perceptible to the Soldier, giving them increased situational awareness and offset from potential adversaries," said Christopher Reardon, a researcher at the Army Combat Capabilities Development Command.

The Army noted it will perform studies to explore methods that could augment teaming capabilities between humans and robots.