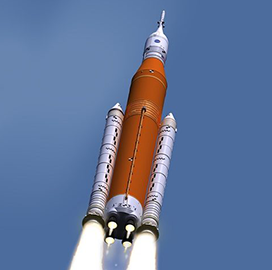 NASA has completed the first four green run tests of its Space Launch System rocket's core stage in preparation for four more tests in the series. The effort's assigned team ran the fourth test with gaseous nitrogen and helium as a more efficient alternative to the liquid hydrogen and oxygen propellants intended for the conclusive hot-fire test, the space agency said Saturday.

Checks for leaks and functional issues across engines and propulsion systems took place over a three-week period. The test built on three previous ones that tackled the SLS core stage's computers, navigation systems, avionics and fail-safe systems.

The upcoming fifth test will evaluate the performance of the stage's thrust vector control system that steers the RS-25 engines via actuators. The sixth and seventh tests will rehearse the launch countdown timeline and propellant use.

The eighth, final test will subject the core stage to a fire test with the rocket's four RS-25 engines. NASA will move the core stage to Kennedy Space Center after the eighth test's completion and succeeding preparations.

SLS will carry the Orion spacecraft in support of Artemis, an effort to revive manned space exploration. The manned Artemis mission to the moon is scheduled for 2024.