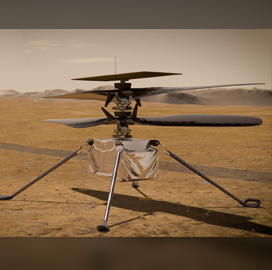 NASA and the Department of Energy (DOE) have established a joint coordinating group to identify potential planetary resources and opportunities in areas such as energy and propulsion, data management and high-performance computing.

Paul Dabbar, undersecretary of energy for science, told Nextgov in an interview that the DOE-NASA coordinating body comes as part of both entities’ efforts to systematize their respective science and energy resource programs, the publication reported Tuesday.

He noted that establishing the body could result in getting astronauts to Mars “in three and a half months” while ensuring readiness in terms of food, physiology and radiation safety.

Conner Prochaska, chief commercialization officer and director of the Office of Technology Transitions at at DOE, said the joint group will support stakeholder efforts to expand the emerging space economy.

“All of this plays a part in making sure that we can take care of that growing economy, as well and keep the U.S. in the forefront,” he noted.

The DOE-NASA group, which conducted its first meeting in July, is likely to meet each quarter of the year, according to Dabbar.