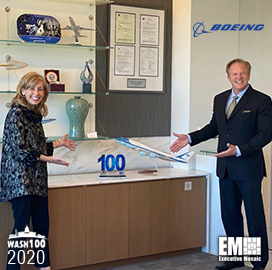 Caret received her fourth Wash100 Award for her continued leadership in the development of Boeing’s Starliner spacecraft, winning major defense contracts for the company and accelerating influential aerospace technology.

Most recently, Caret discussed the company’s investment in advanced manufacturing and digital engineering technologies to support its work on the Navy MQ-25 unmanned tanker and the Air Force T-7 trainer. Caret expressed her confidence in those investments

“I actually remain very confident in the investments we made on both the MQ-25 and the T-7. … We had already redesigned, reimagined, how are we going to use advanced modeling and simulation and digital twins,” Caret said.

In addition, Caret’s efforts have continued to advance the company’s presence in the defense sector in 2019, and she has added space exploration as a central initiative.

“It was an absolute bullseye, better than I think anybody anticipated,” NASA Administrator Jim Bridenstine and fellow 2019 Wash100 Award recipient said of the landing. “That’s good for the agency, it’s good for Boeing; that’s good for the United States of America.”

In addition to Boeing’s space development, Caret has also made advancements in the company’s aerospace defense. Caret supervised and secured Boeing a potential 10-year, $14.3 billion contract to modernize weapons systems used on the U.S. Air Force’s B-1 Lancer and B-52 Stratofortress bomber platforms in April 2019.

Executive Mosaic congratulates Boeing and Leanne Caret for her 2020 Wash100 Award selection. Caret’s dedication to space innovation and the progression of aerospace technology is a clear indication of her eye for innovation and a vision for the future.

The Wash100 award, now in its seventh year, recognizes the most influential executives in the GovCon industry as selected by the Executive Mosaic team in tandem with online nominations from the GovCon community. Representing the best of the private and public sector, the winners demonstrate superior leadership, innovation, reliability, achievement and vision.