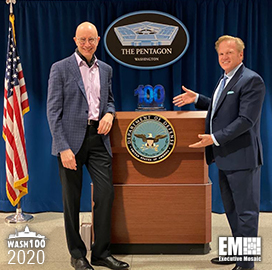 Jim Garrettson, founder and CEO of Executive Mosaic, presented Michael Conlin, chief business analytics officer for the US Department of Defense (DoD), with his first Wash100 Award on Tuesday.

Executive Mosaic has given the most prestigious award in all of government contracting (GovCon) to Conlin for his pushing data science in the defense department and working to improve talent recruitment to shift DoD’s culture.

During his tenure as DoD CDO, Conlin advocated heavily for information technology systems and technology, clean and reliable data use and the increasingly important role CDOs are playing in today’s federal sector.

During Potomac Officers Club’s (POC) 2019 Data Management Forum in April 2019, Conlin delivered a keynote address focusing on enhancing oversight and management while trying to improve affordability and performance for DoD.

In a recent interview, Conlin spoke about navigating the cultural challenges within the department, gaining data visibility and the evolving role of CDOs.

“This is ultimately about improving affordability and performance of the Department,” he said. “What’s the data, who can access it under what policy for what purpose, roles and responsibilities, identity management, all of this is a combined set of solutions that we have to put in place. That’s the essence of the role.”

Executive Mosaic congratulates Michael Conlin on his 2020 Wash100 Award selection. His drive to improve DoD’s workforce, its culture and its use of data science have demonstrated an incredible devotion, leadership and vision for the GovCon sector.