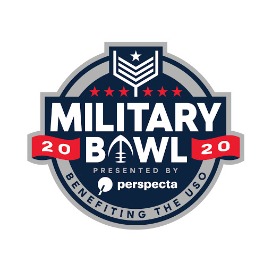 Perspecta Inc. will be the presenting sponsor for the Military Bowl postseason college football bowl game, named Military Bowl presented by Perspecta, over the next three years, the Military Bowl Foundation reported on Wednesday. The game will benefit the United Service Organizations (USO) of Metropolitan Washington-Baltimore.

“We have enjoyed a strong partnership with Perspecta and are thrilled to take it to the next level,” Military Bowl Foundation president and executive director Steve Beck said. “Perspecta and its leadership share our commitment to honoring and supporting the nation’s service members and we look forward to working together even more closely.”

The Military Bowl has matched representatives of the Atlantic Coast Conference and the American Athletic Conference at Navy-Marine Corps Memorial Stadium in Annapolis, Md. Perspecta has been a Military Bowl four-star sponsor since it was formed two years ago.

Perspecta chairman and chief executive officer (CEO) Mac Curtis currently serves on the Military Bowl Board of Directors. Curtis is also a six-time Wash100 Award recipient. Vencore, which merged to form Perspecta in 2018, had been a Military Bowl sponsor since 2015.

The Military Bowl has also launched a new logo, featuring, at the top of the mark, the six branches of the military are represented by the stars flanking the custom goalpost icon. That icon integrates a stars and stripes motif and serves as a proprietary element for the event. Proceeds from the Bowl also benefit Patriot Point, the Military Bowl’s 290-acre retreat for recovering service members, their families and caregivers on Maryland’s Eastern Shore.

“Supporting the men and women of the military is foundational to our corporate culture,” Curtis said. “Nearly 20 percent of our nationwide workforce is comprised of veterans and reservists, so we could not be more excited for Perspecta to sponsor the Military Bowl and foster the incredible mission of the Military Bowl Foundation, which benefits USO-Metro and Patriot Point.”