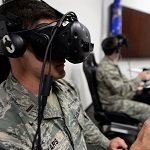 The U.S. Air Force has allocated $67 million in contracts to develop the service branch’s virtual training, FedScoop reported on Monday. The work under the contract will provide airmen with new training platforms that educate on aircraft and other systems, as the military continues to social distance during the ongoing pandemic.

“The system simulates real workspaces for occupational safety and health, educational and training purposes. It will be used to provide aircraft maintainers with a virtual environment where they can develop and improve their skills on various aircraft platforms,” the contract release states.

The U.S. Air Force has awarded Mass Virtual two firm-fixed-price contracts, one for $60 million and one for $7 million, that will extend the company's efforts, leveraging its virtual reality training services. The service branch began working with Mass Virtual last fall, awarding the firm a small prototype contract at a pitch event focused on virtual reality training systems.

The contracts with Mass Virtual will promote aircraft familiarization and real-time task manual instruction. The U.S. Air Force has recently increased reliance on virtual reality training and augmented reality simulators as a means to give pilots hands-on, simulated virtual training.

Integrating virtual and augmented reality systems has relied on large data sets of flight simulations and artificial intelligence (AI) to provide pilots with realistic training environments. The U.S. Air Force has started on a new virtual training system, Pilot Training Next, which is being incorporated into undergraduate pilot training.

In July, the U.S. Air Force announced a new virtual reality trainer is one step closer to potentially transforming the way B-52 Stratofortress student-pilots train for combat, the Virtual Reality Procedures Trainer (VRPT).

“Our adversaries are getting much better, much faster,” Budgeon said. “This system has the potential to revolutionize the entire training process and make our student graduates better.”