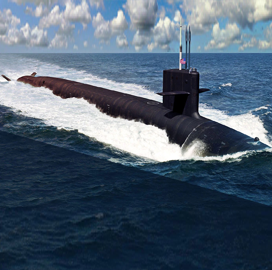 The White House has asked Congress to exempt the U.S. Navy’s Columbia-class ballistic missile submarine program and other initiatives from restrictions in a continuing resolution that could block funding for “new start” programs, Defense News reported Thursday.

The Senate and House have begun discussions to pass a stopgap funding bill before the end of September to avert a government shutdown. Without the exemption, the Navy would not have the budget or authorization to kick off work on the Columbia program, which is considered a new start.

The service awarded General Dynamics’ Electric Boat subsidiary in June a contract modification to complete design work on two Columbia-class submarines with an option to build the two vessels, which could bring the contract’s ceiling to $9.5 billion if the option is exercised.

“The intent would be to award that option as soon as possible after the FY21 appropriation to ensure we keep this No. 1 priority on track,” James Geurts, assistant secretary for research, development and acquisition at the Navy and a 2020 Wash100 Award winner, said in June.

Potomac Officers Club will host its 2020 Navy Forum on September 30th. Click here to register for the event. James Geurts, Assistant Secretary for Research, Development, and Acquisition with the U.S. Navy and 2020 Wash100 Award recipient will serve as a keynote speaker during the event.

Geurts will discuss how the U.S. Navy has continually worked to decentralize, differentialize and digitize the service branch’s work as well as develop its talent in the field.

The Navy has also accelerated acquisition channels, modernized emerging technologies and increased research and development to become more effective in warfare. As the Navy continues to evolve to meet the growing demands, challenges still remain.

Join Potomac Officers Club’s 2020 Navy Forum to hear notable industry and federal leaders discuss the initiatives, efficiencies and challenges the service branch faces as well as how to join together to improve the future of warfare.