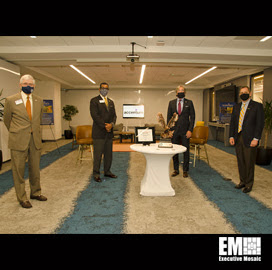 The Department of Defense (DoD) has awarded Accenture its prestigious 2020 Employer Support Freedom Award for the company’s support of its National Guard and Reserve member employees, Accenture reported on Thursday.

“We are honored to receive the highest award that the Department of Defense gives employers,” said Jimmy Etheredge, Accenture’s CEO of North America. “It is our privilege to create pathways for National Guard and Reserves members as they bring their many talents to civilian careers. Their dedication, discipline, teamwork and leadership are shining examples to us all.”

The Employer Support of the Guard and Reserve (ESGR) has coordinated the annual Freedom award program, on behalf of the Secretary of Defense. After it receives nominations, ESGR state committees review the organizations and make recommendations on which employers should move to the next round in three categories.

The categories include small employer, large employer and public sector. Following, a national selection board, consisting of senior DoD officials, business leaders and prior awardees, will select up to 15 employers to receive the award. In 2020, ESGR received more than two thousand nominations for employers, and awarded 15 companies, including Accenture.

“I’d like to thank the Department of Defense for recognizing Accenture with this prestigious Freedom Award. We salute the many National Guard and Reservists currently employed at Accenture for their tireless work ethic and critical contributions, not only to Accenture, but to our great nation,” Vince Vlasho, Accenture Federal Services’ (AFS) Defense Portfolio lead, said.

The program receives nominations from National Guard or Reserve members who work with the organizations they nominate. Accenture was nominated by staff sergeant Tiny Freeman, who currently serves in the company’s public sector practice.