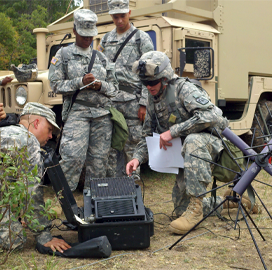 The C5ISR Center of the service’s Combat Capability Development Command conducted the NetModX field experiment from July 20 through Oct. 2 at Joint Base McGuire-Dix-Lakehurst in New Jersey and one of the technologies tested for Capability Set ’23 is a Silvus-built radio.

The radio team at the C5ISR Center integrated power control and interference avoidance capabilities into the Silvus radio as part of the experiment. One of the satcom capabilities tested by the service during NetModX is the interference cancelation technology.

“Interference cancellation has very advanced algorithms that are actually able to separate the interference from the original signal of interest, the signal that you want to receive, clean it up and present that back at the sanctuary hub, thus allowing the communication to continue going on even though you’re being jammed by an adversary,” said Jeremy Zwirn, an electronics engineer for the C5ISR Center’s satcom resiliency team.