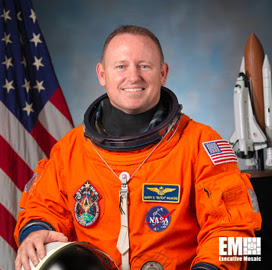 NASA has appointed Barry “Butch” Wilmore to serve as commander of Boeing’s CST-100 Starliner for the Crew Flight Test, succeeding Chris Ferguson, Boeing reported on Wednesday. Wilmore previously served as a backup crew member Starliner flight, and will join Nicole Mann and Mike Fincke for this first crewed mission of the Starliner spacecraft.

“My personal thank you to Chris for his leadership; he is putting his family first, which Boeing fully supports,” said Leanne Caret, president and CEO, Boeing Defense, Space & Security and 2020 Wash100 Award recipient. “We are fortunate he will continue to take an active role on the Starliner program and bring his depth and breadth of experience in human spaceflight to the program.”

Ferguson will transition to the role of director of Mission Integration and Operations. He will work to ensure the Starliner spacecraft and training systems support NASA’s astronauts, training and mission. Ferguson has been a member of the Starliner program since 2011.

“I have full confidence in the Starliner vehicle, the men and women building and testing it, and the NASA astronauts who will ultimately fly it,” Ferguson said. “The Boeing team has taken all lessons from our first uncrewed Orbital Flight Test to heart, and is making Starliner one of the safest new crewed spacecraft ever fielded. I will be here on the ground supporting Butch, Nicole and Mike while they prove it.”

Wilmore will begin training with his crewmates immediately in preparation for the 2021 flight to the International Space Station (ISS). Boeing will focus on delivering safe, reliable and cost-effective solutions for crew transportation services to and from the ISS.

“I’m grateful to Chris for his exceptional leadership and insight into this very complex and most capable vehicle,” Wilmore said. “Having had the chance to train alongside and view this outstanding crew as backup has been instrumental in my preparation to assume this position.”