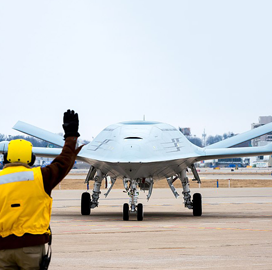 The U.S. Navy intends to use the U.S. Army's Ground Based Sense and Avoid system aboard the Boeing-built MQ-25 Stingray unmanned aerial tanker, Inside Defense reported Tuesday.

Capt. Chad Reed, MQ-25 program manager, told the publication in a statement the service is eyeing the GBSAA platform to “support MQ-25 fleet operations in the national air space under federal aviation regulations.”

GBSAA has been used by the Army on the General Atomics-built Gray Eagle unmanned aircraft system since 2016 and works to provide situational awareness to UAS operators, according to an inactive solicitation by the service branch.