CBO: Pandemic Pushes US Budget Deficit to $3T in Fiscal 2020 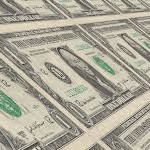 The federal budget deficit for the 2020 fiscal year ended on Sept. 30th reached $3.1 trillion, more than three times higher than the prior-year period’s shortfall, according to a new Congressional Budget Office (CBO) report.

CBO attributed the approximately 200 percent debt hike to economic consequences of the coronavirus pandemic and legislative response to the health crisis, with the deficit reaching $700 billion in the first six months and skyrocketing by $2.4 trillion in the remaining half of FY 2020.

Total outlays increased by 47 percent from $4.5 trillion in FY 2019 to $6.6 trillion in 2020. Unemployment compensation and payments of refundable tax credits were estimated as top outlay contributors.

The government recorded $3.4 trillion in 2020 revenues, a one percent dip from the previous year's figures partly attributable to a decline in collections of individual income taxes, the report noted.

Revenues remain below the average of 17.3 percent of gross domestic product for the last five decades.