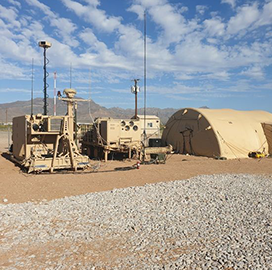 A U.S. Army spokesperson said documents that will inform the Department of Defense’s Milestone C decision on an air defense command-and-control weapon system Northrop Grumman is developing for the service branch are in the final review stage, Defense News reported Tuesday.

Defense Acquisition Board members agreed with a determination that IBCS met engineering and manufacturing development requirements and received instruction from Pentagon acquisition chief Ellen Lord  to perform a follow-on document review within 30 days, according to the publication.

Northrop demonstrated the potential of its system to fuse sensor data and engage multiple targets during a flight test held in August as part of a limited user test with the Army.

The branch has invested $2.7B in IBCS development efforts to date, the report said.