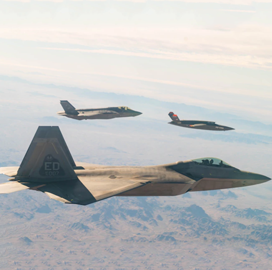 During the test, the gatewayONE technology enabled the translation of incompatible data formats to facilitate data sharing between the two fifth-generation fighter aircraft. The flight demonstration achieved nine of the 18 established test objectives.

“The gatewayONE payload really showed what’s possible and helped us take a big step towards achieving (Joint All-Domain Command and Control),” said Lt. Col. Eric Wright, a 59th Test and Evaluation Squadron F-35 pilot. “This critical capability provides additional connections between our advanced fighters and other forces and battle managers across all domains.”

The gatewayONE technology is part of the Advanced Battle Management System program of the Air Force and the U.S. Space Force that seeks to create an internet of things platform for the military and advance the JADC2 concept to link all sensors and warfighters across ground, air, maritime, space and cyber domains.

“The future is promising, and gatewayONE will allow the F-22 and F-35 to connect to and feed data sources they've never before accessed. Those future connections will bring additional battlefield awareness into the cockpit and enable integrated fires across U.S. forces,” Wright added.

The XQ-58A Valkyrie attritableONE platform equipped with the gatewayONE payload flew in formation with Lockheed Martin-built F-22 and F-35 aircraft during the test but lost connectivity shortly after launch.