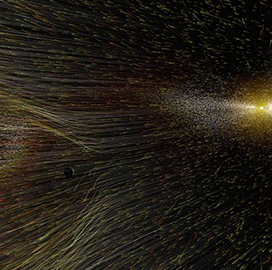 NASA is slated to launch two small-satellite missions valued at $140 million combined as part of the agency’s Heliophysics Solar Terrestrial Probes initiative in 2025.

The rideshare missions will launch along with NASA’s Interstellar Mapping and Acceleration Probe and are meant to support research into the Earth’s exosphere as well as propulsion technologies driven by solar radiation, the agency said Friday.

The first mission, known as Global Lyman-alpha Imagers of the Dynamic Exosphere (GLIDE), is valued at $75 million and will focus on tracking hydrogen-emitted ultraviolet light in the region between the Earth’s atmosphere and outer space.

Solar Cruiser, the second probe, is a technology demonstration effort worth $65 million that is aimed at evaluating the capacity of solar photons to support spacecraft built to forecast solar storms.

NASA also allocated funding for the /Spectral Imaging of Heliospheric Lyman Alpha (SIHLA) mission of opportunity which will involve mapping the sky to study the boundary between the heliosphere and heliopause.

SIHLA will receive a final decision on STP rideshare participation at a later date.