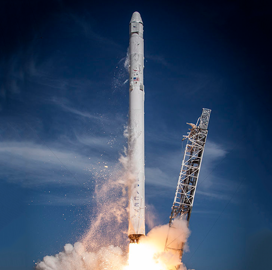 The rocket’s upper stage deployed the SXM-7 satellite into a geostationary transfer orbit 31 minutes after liftoff, and the first stage successfully landed on a drone ship in the Atlantic Ocean. That stage made its seventh flight, having previously launched the Demo-1 commercial crew test flight, the Radarsat Constellation Mission and four sets of Starlink satellites.

SXM-7 is one of two new digital audio radio service satellites that SiriusXM ordered from Maxar Technologies in 2016. The satellite weighs close to 15.4 thousand pounds at launch, and will generate more than 20 kilowatts of power. Additionally, SXM-7 will deploy a large antenna that will broadcast programming for SiriusXM subscribers.

The launch follows SpaceX’s launch of a satellite designed to monitor sea levels across the globe under a U.S.-U.K. partnership in Nov. 2020. The Sentinel-6 Michael Freilich satellite lifted off from Vandenberg Air Force Base Saturday on a mission to collect sea level data, support ship navigation and inform weather forecasts.

“The changing Earth processes are affecting sea level globally, but the impact on local communities varies widely,” said Karen St. Germain, who leads NASA's Earth Science Division. She added that the spacecraft will help NASA further understand Earth's planetary changes with regard to sea level and the corresponding impact on coastal communities.

"These data, which can only be obtained by measurements from space, will bring a wide range of benefits to people around the globe, from safer ocean travel to more precise prediction of hurricane paths, from greater understanding of sea level rise to more accurate seasonal weather forecasts, and so much more," noted Alain Ratier, director-general of the European Organisation for the Exploitation of Meteorological Satellites.