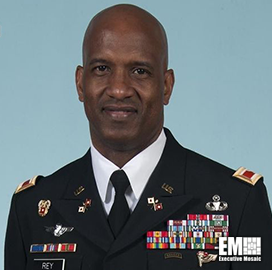 Brig. Gen. Jeth Rey, J-6 at the U.S. Central Command, is slated to succeed  Maj. Gen. Peter Gallagher as director of the U.S. Army's network cross-functional team at an undetermined date, C4ISR reported Monday. Rey will transfer from MacDill Air Force Base in Florida to Aberdeen Proving Ground in Maryland once he assumes his position.

N-CFT has been established to handle the modernization of the service branch's tactical network. The team helped the Army roll out a capability set process that involved the biannual development and delivery of new tactical network tools under Gallagher's leadership.

According to the report, the team is currently planning Capability Set 23th, which is set to undergo preliminary design reviews in April 2021.