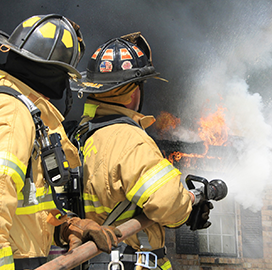 NASA's Jet Propulsion Laboratory (JPL) and the Department of Homeland Security (DHS) have conducted initial field tests of a technology designed to locate first responders during emergency response missions even when they are inside a burning building.

DHS said Friday its science and technology directorate worked with JPL and California-based company Balboa Geolocation to assess the data collection, visualization and tracking features of the Precision Outdoor and Indoor Navigation and Training for Emergency Responders (POINTER) system.

The POINTER technology is intended to use magnetoquasistatic fields and generate 3D-based location data to help first responders find an injured or lost team member.

The team fielded transmitters, receivers and a command station within a five-story, 8K-square-foot representative house and found that the system could detect emergency response personnel at a standoff distance of 70 meters.

POINTER also identified the locations of the first responders in 3D within a one-meter distance across all levels of the facility during the test, where participants wore portable receivers powered by small rechargeable lithium batteries.

According to DHS, the system will undergo operational field tests throughout the year and the department expects the availability of the device by early 2022.