DoD to Transition Oversight of Israel to U.S. Central Command 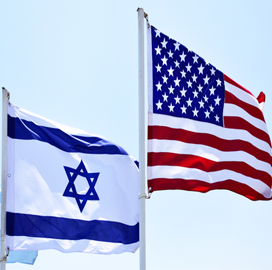 The Department of Defense (DoD) will transition oversight of Israel from U.S. European Command (EUCOM) to U.S. Central Command (Centcom) as part of a change to its unified command plan, DoD News reported Friday.

The move was prompted by the signing of Abraham Accords that led to the United Arab Emirates, Bahrain, Sudan and Morocco to open diplomatic relations with Israel.

"The easing of tensions between Israel and its Arab neighbors subsequent to the Abraham Accords has provided a strategic opportunity for the United States to align key partners against shared threats in the Middle East," DoD said in a statement published Friday.

The Pentagon said the U.S. considers Israel a strategic partner and expects the move to lead to more opportunities for cooperation with Centcom partners and help maintain cooperation between European allies and Israel.

The Wall Street Journal reported the defense policy move is part of the Trump administration’s efforts to shape the national security agenda in the Middle East for the incoming administration and has been advocated by pro-Israel groups to promote Israel-Arab cooperation against Iran.