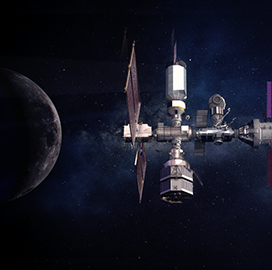 The Japanese government has inked an agreement with NASA to provide capabilities to sustain the habitation module of the agency's Gateway orbital outpost as part of the Artemis program.

Northrop Grumman partnered with the Japanese government to deliver batteries that will power Gateway's Habitation and Logistics Outpost module. Japan will also study potential updates for the HTV-X spacecraft in a bid to support Gateway's logistics resupply activities.

"We’re honored to announce this latest agreement with Japan to support long-term human exploration on and around the Moon as part of the Artemis program," said Jim Bridenstine, NASA administrator and 2019 Wash100 Award recipient.

Gateway is designed to support scientific research efforts and function as a rendezvous point for astronauts that will fly to the Moon via the Space Launch System and the Orion spacecraft. The orbital outpost will also test technologies that will support manned missions to the Red Planet.

The European Space Agency (ESA) and NASA entered into an agreement to incorporate Gateway's life support capabilities into the outpost.