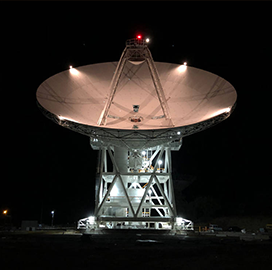 NASA has added another antenna to its Deep Space Network (DSN) that will handle communications with space missions including the Perseverance rover that is slated to land on Mars in Feb. 2021. The agency said Saturday the Deep Space Station 56 (DSS-56) satellite dish has begun live operations and will serve as the first antenna to work with DSN across all communication frequencies.

DSS-56, which spans 34 meters, operates as an “all-in-one” dish and is meant to serve as a backup antenna for the inventory of satellite dishes located at the Madrid Deep Space Communications Complex in Spain. Construction of the antenna began in 2017 in an effort to address frequency-band limits in the existing dishes at the Madrid location.

NASA envisions DSS-56 to support the interplanetary switchboard network in managing navigation and communication operations for subsequent deep-space missions including the upcoming Artemis manned flight to the moon.

Badri Younes, deputy associate administrator and program manager of the Space Communications and Navigation unit at NASA, said DSS-56 represents the agency’s goal of supporting real-time functionalities for over 30 missions in deep space. DSN operates under SCaN and encompasses ground stations in Spain, Australia and California.