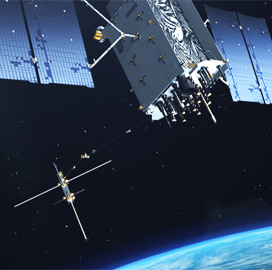 President Trump has issued a directive mandating NASA, the Director of National Intelligence (DNI) and the departments of Defense (DoD), State and Commerce (DOC) to coordinate and drive U.S. positioning, navigation and timing programs.

Space Policy Directive 7 seeks to sustain and modernize global position system infrastructure for U.S. and allied operations focused on economic, homeland and national security, according to the memo released Friday.

Under the directive, the secretary of state must work with counterparts in defense and transportation to promote agency programs on GPS and foreign civil PNT. The state secretary must also lead efforts to negotiate with foreign nations on military PNT issues, the notice states.

In addition, the secretary of commerce must promote U.S. industry access to foreign space-based PNT markets and invest in research and development efforts on GPS-driven commercial technologies.

The transportation secretary is also mandated to promote civil space-based PNT services while NASA must work to establish GPS requirements for civil and commercial space systems.

Other joint efforts outlined in the directive include protection of the radio-frequency spectrum through “appropriate domestic and international spectrum management and regulatory practices.”