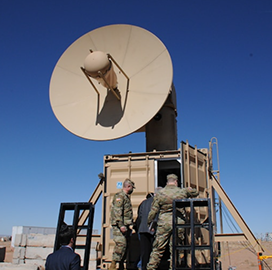 The partnership between AFRL and the Army will further build the Tactical High Power Operational Responder or THOR prototype, which can neutralize the electronic components of multiple drones at the same time, the Army said Tuesday.

“High energy lasers kill one target at a time, and high powered microwaves can kill groups or swarms, which is why we are pursuing a combination of both technologies for our Indirect Fire Protection Capability rapid prototyping effort,” Thurgood said.

The Army wants to prototype a high-power microwave system for indirect fire protection by fiscal year 2024, based on THOR's fielding. THOR is now undergoing trials at Kirtland AFB, in preparation for overseas deployment.