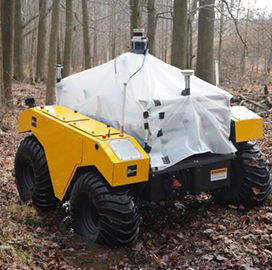 Army Research Laboratory (ARL) has begun to demonstrate its new autonomous robotics technologies at a facility on the Graces Quarters peninsula, which is located near Baltimore, Md.

The ARL Robotics Research Collaborative Campus, part of Aberdeen Proving Ground, is using 200 acres of ground that used to be a venue for munitions testing, the Army said Thursday.

"These data sets can be offloaded from the platform following testing for labeling, analysis, and incorporation into machine learning applications that iteratively improve on the ground platform’s ability to navigate environments like this in the future,” said Jeffrey Westrich, program manager for the campus.

Previously, the Army mostly used virtual and digitally simulated testing for these technologies. The service branch now has a venue for field testing with R2C2, which includes a site for military operations in urban terrain.