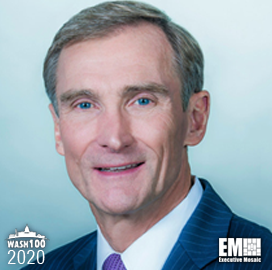 Roger Krone, chairman and chief executive officer of Leidos and 2021 Wash100 Award recipient, has been elected as a member of the National Academy of Engineering, the company reported on Friday. Krone was elected to the Academy for his leadership in industry engineering and milestones across aerospace and information technology (IT) programs. Krone will be inducted during the Academy's annual meeting on Oct. 3, 2021.

"Roger's work for our customers and his many accomplishments have left an incredible impact on our industry," said Bob Shapard, lead director of the Leidos Board of Directors. "He continually inspires the culture of innovation at Leidos and enables teams to develop novel solutions that make the world safer, healthier and more efficient."

Krone gained his membership through nominations by current Academy members. He was recognized for his accomplishments in one or both of the Academy’s two categories. The first category recognizes executives for their leadership in engineering research, practice or education, while the second category acknowledges leaders that drive new and developing fields of technology.

Before joining Leidos, Krone served as president of Network and Space Systems for The Boeing Company. With Boeing, he directed approximately 15,000 employees in 35 states and 12 countries.

Krone joined McDonnell Douglas in 1992, where he served as director of financial planning, vice president and treasurer, following his 14-year career at General Dynamics. With General Dynamics, Krone held positions in program management, engineering and finance.

"I am honored to represent the thousands of scientists and engineers at Leidos by serving in the Academy," Krone said. "As an engineer at heart, it's humbling to be recognized alongside the greatest names in our field. I thank the Academy members for their trust and recognition."

Krone received his  2021 Wash100 Award for his pursuit of major acquisitions and competitive contracts that have driven company growth and cemented Leidos’ position as a leader in the federal sector.

Executive Mosaic congratulates Roger Krone and Leidos for his 2021 Wash100 Award. Krone has won a Wash100 Award each year of the award’s history, which demonstrates an unparalleled commitment to the GovCon sector and the continued excellence of its top members.

To vote for Krone, or your favorite executive of this year’s Wash100 Award selection, visit Wash100.com to cast your TEN votes, learn more about the history of the award and read about the latest class of winners from 2021.