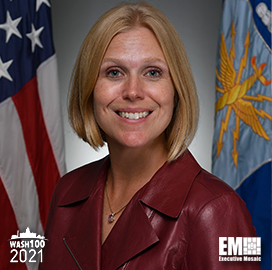 Knausenberger said at an AFCEA event that the Air Force needs to keep up with the private sector which has been experiencing increases in IT spending.

The service must put more focus on automating manual procedures to ensure the nation’s competitive advantage, according to Knausenberger. The Air Force also needs more personnel with skills in coding, cloud engineering, artificial intelligence and communications, she noted.

Knausenberger added that airmen must also have the capacity to fully understand an environment that includes emerging capabilities such as 5G and satellite communications including SpaceX’s Starlink broadband constellation.

Col. Andrew D’Ippolito, A-6 director at Air Forces in Europe-Air Forces Africa, said at a prior industry event that the service needs to keep pace with commercial network technologies to prevent challenges with the Joint All-Domain Command and Control (JADC2) platform.

Analysts expect the defense budget to reach up to $708 billion, according to C4ISRnet’s report.

Visit Wash100.com to cast a vote for Lauren Knausenberger as the most significant executive of consequence to the GovCon sector. Cast your TEN votes TODAY to advocate your favorite leaders in the federal and government sectors. The elite leader with the most votes by April 30th will be recognized by the GovCon community as the industry’s most influential member.