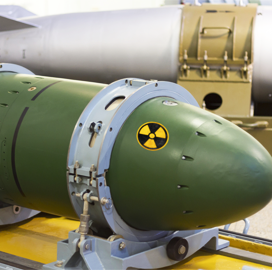 “The ICBM Act makes clear that we can begin to phase out the Cold War nuclear posture that risks accidental nuclear war while still deterring adversaries and assuring allies, and redirect those savings to the clear and present dangers presented by coronaviruses and other emerging and infectious diseases,” commented Sen. Markey.

If enacted into law, this legislation would prohibit the federal government from using fiscal 2022 spending on the GBSF program and National Nuclear Security Administration’s W87-1 warhead modification program. This program's funds would instead be allocated to the National Institute of Allergy and Infectious Diseases (NIAID) for research on a universal coronavirus vaccine that could protect against future pandemics.

Along with transferring funds to NIAID, the monies allocated for the W87-1 modification program would go to the Centers for Disease Control and Prevention (CDC). The bill would also create an independent study of the National Academy of Science to find ways to prolong Minuteman III missiles' operational life until 2050.

Northrop Grumman won a $13.3 billion GBSD contract to build a replacement for the aging LGM-30G. The project's total acquisition costs are estimated to be somewhere between $93 to $96 billion.

U.S. Strategic Command and Air Force officials have often stated that GBSD is the only cost-effective means to modernize the U.S. intercontinental ballistic missile leg of the nuclear triad. STRATCOM head Adm. Charles Richard commented in January that “You cannot life-extend Minuteman III, It is getting past the point of [where] it’s not cost-effective to life-extend Minuteman III. You’re quickly getting to the point [where] you can’t do it at all.”

In 2020, Rep. Khanna presented a similar proposal to the House Armed Services Committee that would have moved $1 billion from the GBSD to coronavirus pandemic-related research. That proposal failed to pass the committee last July.