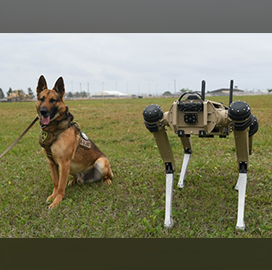 The Quad-legged Unmanned Ground Vehicles can navigate on difficult terrains and come with 14 sensors each to allow a situational awareness coverage of 360 degrees, USAF said Monday. Q-UGVs also feature crouch and high-step modes as well as the capacity to endure a temperature range of minus 40 to 131 degrees.

"They can patrol the remote areas of a base while defenders can continue to patrol and monitor other critical areas of an installation," said Mark Shackley, security forces program manager at Tyndall AFB's program management office.

Tyndall AFB have been working with various organizations such as the Air Force Research Laboratory (AFRL) and the 325th Civil Engineer Squadron since July to develop the Q-UGVs.