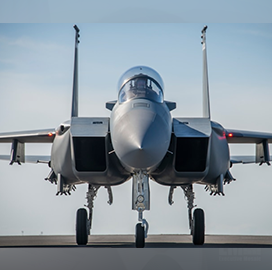 The U.S. Air Force has unveiled a new Boeing-built fighter jet to help the service branch meet its capacity goals while providing operational and developmental testing opportunities for USAF aircraft.

Boeing will provide a maximum of 144 F-15EX Eagle II jets to support the Air Force’s efforts to increase the F-15 fleet’s readiness capacity and replace the F-15C/D variants, the service said Wednesday.

The Air Force’s 96th Test Wing and 53rd Wing are slated to commence testing and evaluation activities with the 40th Flight Test Squadron for F-15EX.

Lt. Gen. Duke Richardson, military deputy for the Office of the Assistant Secretary of the Air Force for Acquisition, Technology and Logistics, unveiled the fighter jet Wednesday during a ceremony at Eglin Air Force Base in Florida.

“I’m pleased to say we’ve responded boldly and decisively, with a proven platform that’s modernized and optimized to maintain air superiority now and into the future,” he said.

The first formal training unit for F-15EX will operate under the 173rd Fighter Wing at the Kingsley Field Air National Guard Base in Oregon by 2024. Oregon ANG will also house the operational squadron for the fighter fleet.