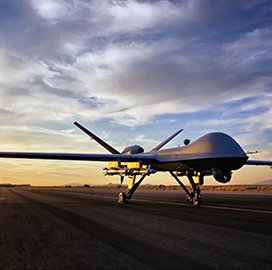 USAF said Wednesday it will award General Atomics’ aeronautical systems business a delivery order to produce a multidomain operation variant of the MQ-9 platform and the service plans to incorporate M2DO features into a portion of the fleet.

The San Diego-based company built Reaper with intelligence, surveillance, reconnaissance and strike mission systems, which operational squadrons have used in the fight against violent extremist organizations.

Lt. Col. Nick Jordan, MQ-9 production and retrofit materiel leader, said the modernization effort signifies the potential of this platform to help the military conduct missions beyond counter-violent extremism campaigns in the next 10 to 15 years.

The project will include modernizing the Reaper’s electro-optical and infrared sensor and expanding the weapon types to be carried by the vehicle. The Air Force said it expects the planned updates to extend the service life of the UAV until 2035.

Initial retrofit work is underway to protect the remotely piloted aircraft from jamming as the branch’s MQ-9 program office plans to develop an open architecture and implement an electronic power booster for the platform.