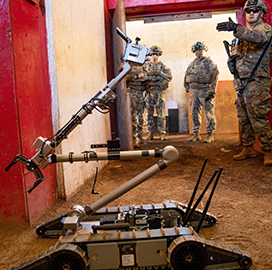 Army Research Laboratory (ARL) worked with the University of Southern California (USC) to study how soldiers would communicate with autonomous robots.

The Army said Monday it worked with the Institute for Creative Technologies, USC-hosted research center funded by the Department of Defense (DOD), to prototype the Joint Understanding and Dialogue Interface (JUDI) system.

He said the system features a statistical language classifier that allows autonomous systems to understand the intent of what a soldier communicates. Gervits said JUDI has the potential to reduce the amount of time needed for deployment in new environments.