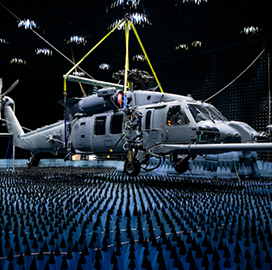 Sikorsky, a Lockheed Martin subsidiary, has worked with the U.S. Air Force to demonstrate the performance of HH-60W Jolly Green II, a new combat search and rescue helicopter that was transported to Eglin Air Force Base in Nov. 2019 to undergo various tests.

USAF said Thursday that Jolly Green II's developmental test program, which the team completed on Tuesday, was also intended to optimize the configurations of the test aircraft's weapon system.

The maiden flight of the HH-60W in May 2019 kicked off the testing efforts. It logged over 1,100 flight test hours across six evaluations.

The follow-on testing will be held at Nellis AFB in Nevada in 2022. It will be overseen by the Combat Search and Rescue Combined Test Force. Jolly Green II is planned for delivery to Air Force rescue units following its modification to prepare for operational use.