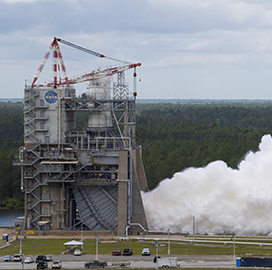 NASA held the second round of hot firing in a new test series for the RS-25 engine, a component of the Space Launch System rocket that would eventually send astronauts to the Moon.

The space agency said Wednesday it performed the test on Tuesday at Mississippi-based Stennis Space Center. The engine fired for a total of over eight minutes during the test.

Aerojet Rocketdyne, the RS-25 program's prime contractor, will collect the resulting data as it begins to make a new batch of RS-25 engines. NASA plans to conduct a total of seven tests under the new series.

A set of four RS-25 engines generates 1.6 million pounds of thrust upon launch and two million pounds as the rocket ascends. SLS will serve as a critical component of the Artemis program, which aims to revive manned space exploration.