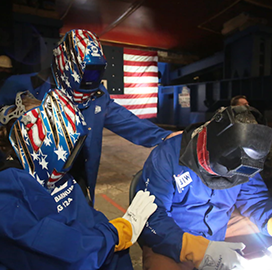 The U.S. Navy has laid the keel of a future guided-missile destroyer in Maine, signifying the start of the ship's construction.

The service said Tuesday that it held a keel-laying ceremony at Bath Iron Works' shipyard for the future USS Harvey C. Barnum Jr. or DDG 124, with the attendance of Thomas Harker, acting secretary of the Navy; Col. Harvey Barnum, the ship's namesake; and Martha Hill, ship sponsor and wife of Barnum.

Marty Fish, a welder at BIW, helped Barnum sign the keel plate, which now also features the initials of Hill as the ship sponsor.

“Col. Barnum has spent his life in service to our country and it is an honor to lay the keel of his ship,” said Capt. Seth Miller, program manager for the DDG 51 class.